The Ateneo Name and University Seal

Fr. James J. Meany, S.J. explains that the name Ateneo is the Spanish form of Atheneum, which the Dictionary of Classical Antiquities defines as the name of “the first educational institution in Rome” where “rhetoricians and poets held their recitations.” Fr. Meany further explains that Hadrian’s Roman school drew its title from a Greek temple dedicated to Athena, the goddess of wisdom, where, the Encyclopedia Britannica says “poets and men of learning were accustomed to meet and read their productions.”

Atheneum is also used to designate schools and literary clubs, a famous example of which is the Atheneum Angelicum, a Dominican center of learning in Rome. Its closest English translation is academy, pertaining to institutions of secondary learning. In fact the Escuela Municipal de Manila became an Ateneo only after it began offering secondary education in 1865. It became known then as the Ateneo Municipal de Manila. But in the Philippines, the name Ateneo is not merely a common Spanish noun. The Society of Jesus established several other Ateneos since 1865, and over the years, the name Ateneo has become recognized as the official title of Jesuit institutions of higher learning.

When America withdrew government subsidy from Ateneo in 1901, Father Rector Jose Clos, S.J. dropped municipal from the school name, and it became the Ateneo de Manila, a name it keeps to this day. And since its university charter was granted in 1959, the school has officially been called the Ateneo de Manila University.

History of the Seal

In 1859, the Escuela Municipal carried the arms of the city of Manila, granted by no less than King Philip II of Spain. By 1865, along with the change of name, the school’s seal had evolved to include some religious images, such as the Jesuit monogram IHS and Marian symbols. In 1909, the Ateneo’s Golden Jubilee, a revised seal was introduced, with clearer Marian symbols and the current motto, Lux in Domino.

For 20 years, the 1909 seal was used. It was a mark of clear distinction and historical prestige. But except for the Marian overtones, and a small IHS monogram, the seal contained little that spoke of Ateneo's thriving Jesuit academic tradition.

Father Rector Richard O’Brien, S.J. introduced a new seal for the Ateneo de Manila’s Diamond Jubilee in 1929. This seal abandons the arms of Manila and instead adopts a design that is thoroughly Ignatian and Jesuit in character. It is the seal the Ateneo uses to this day. 2004 marks the 75th year of this seal.

Above the shield is a Basque sunburst, referring to Ignatius’ Basque roots, but also representing a consecrated host. It bears the letters IHS, the first three letters of the Holy Name of Jesus in Greek. an adaptation of the emblem of the Society of Jesus.

White and blue are also Ateneo's school colors, the colors of Our Lady. Red and gold are the colors of Spain, home of Ignatius and the Ateneo’s Jesuit founders. Finally, these four tinctures mirror the tinctures of the Philippine flag, marking Ateneo's identity as a Filipino University. 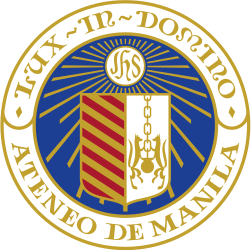 The central symbol of the Ateneo de Manila seal is the shield of Oñaz-Loyola, a device used by many Jesuit organizations. In heraldic terms, the shield may be blazoned thus: Party per pale: Or, seven bendlets Gules; Argent, a two-eared pot hanging on a chain between two wolves rampant. In plain English, the shield is gold, divided vertically. To the viewer's left is a red and gold blendy of seven pairs - seven red bars on a field of gold - the arms of Oñaz given in honor of the seven heroes of the family who fought with the Spaniards against seventy thousand French, Navarese, and Gascons. To the right is a white or silver field with the arms of Loyola: a two-eared pot hanging by hooks on a chain flanked by two rampant wolves, also symbols of the ricos homines or nobility. The name Loyola itself is a contraction of lobos y olla, wolves and pot. The Loyolas were reputed to have provided so well for their own that they could afford to feed wild wolves.

The seal may not be used as a standalone symbol for branding purposes (example, in posters or social media) or for commercial merchandise of any sort.

The seal may only be used on its own for the following purposes, and under strict monitoring of administration: 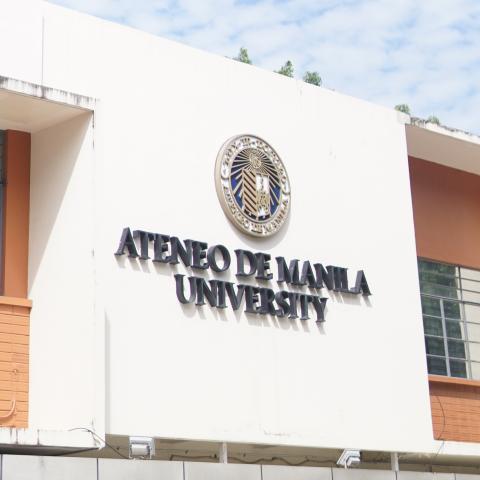 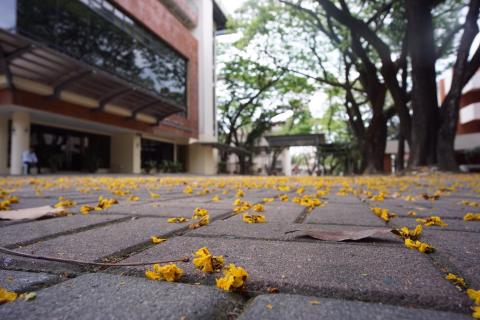