²Bayani is also a celebration of defiance from a man who, though betrayed, imprisoned, and treated as a footnote to the revolution, clung to his desire to unite the Filipinos.

It is a call to act as one people and be today’s heroes as we confront the challenges that divide us and we do it rock opera style!

For student discounts fill out the form at go.ateneo.edu/2BayaniStudent 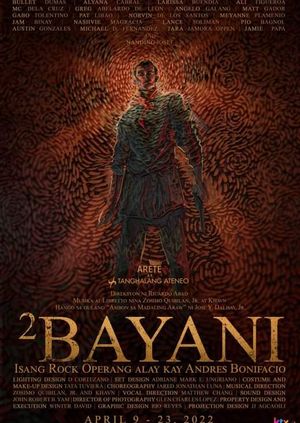 ²Bayani was first staged in 1996 with an ensemble of student performers under Tanghalang Ateneo at the Rizal Mini Theatre in Ateneo de Manila. This year, Areté in partnership with Tanghalang Ateneo will be staging this as an online theatrical production through ktx.ph. The play will still be directed by Ricardo G. Abad with music and lyrics of Zosimo Quibilan, Jr. and Khavn, a reunion after 26 years!

Complying with strict health and safety protocols, the production team proceeded with a 10-day lock-in schedule and recorded a stage-to-screen performance of ²Bayani: Isang Rock Operang Alay Kay Andres Bonifacio in November of 2021. After a month of online rehearsals, the cast was welcomed by Areté's Hyundai Hall with open arms, a theatrical performance after 18 months.

²Bayani is a rock tribute, a rock celebration, a rock & roll call to arms!

²Bayani is a tribute, a tribute to a hero who rallied us for the first time as one nation and one people not katutubo, nor indio, nor mestizo, but as Filipinos and woe to any colonial power that opposes us.