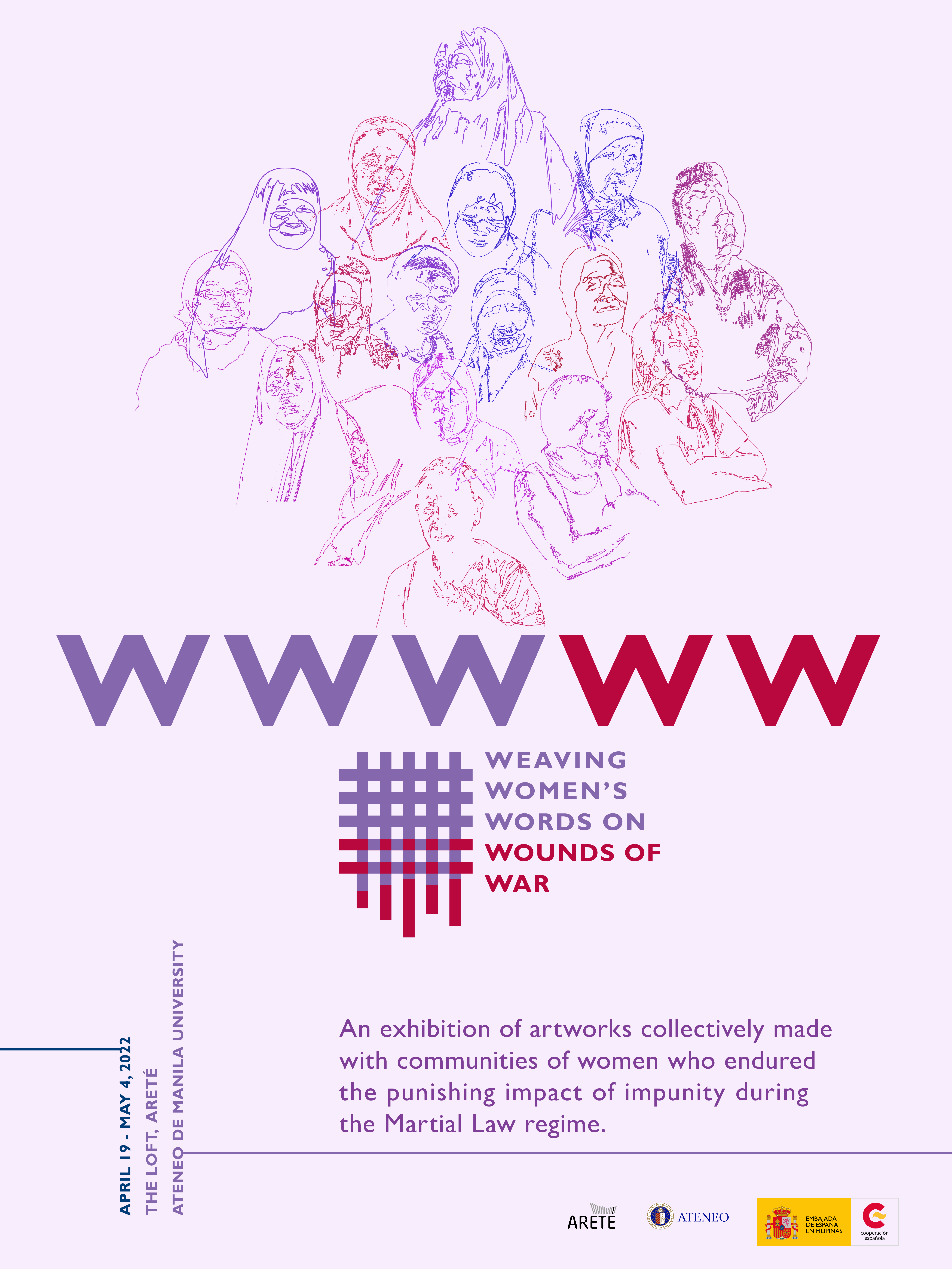 In physically poetic ways, “Weaving Women’s Words on Wounds of War” bears witness to punishing experiences endured by particular women, whom you will meet in this exhibition. They lived their tough participation in war or massive social change during the period immediately before and during the early years of Martial Law in the Philippines (1972 - 1984), when their home communities faced the full brunt of the regime's impunity. These experiences transpired outside mainstream awareness, then and now.

The women themselves helped create this exhibition, which is presented with their individual permissions.

They worked with a hand-selected exhibition team to formulate artworks that communicate their experiences in ways that preserve their dignity. Their approval of the individual artworks concerning themselves includes their guidance about what they wish the public to know at this time; and what needs to be conveyed with guarded postures. What happened to them do not lend to easy storytelling. Theirs are not stories that translate in straightforward ways from raw experience to narrative form.

With heightened sensitivity to the challenges of accounting for the toll of Martial Law—in this project, in six places that remain obscured—this exhibition introduces the public to the impact of authoritarian impunity in tiny Muslim and katutubò communities. The women involved in this exhibition live in Palimbang, Sultan Kudarat; Tabuk and Buscalan, Kalinga; Lake Sebu and Tboli, South Cotabato; Manili, Carmen, Cotabato; Jolo, Sulu; and peripatetically in the vast home waters of the Sama peoples in Sulu and Tawi-Tawi.

Martial Law allowed the government of President Ferdinand Marcos to regard the Philippines’ interior areas as available—with no constraints—to natural resource exploitation. The large-scale projects were articulated as grand national development strategies, which did not recognize the prior stake of small communities living in the areas to be denuded, or flooded, or dug up, or flattened—literally or culturally. President Marcos was simultaneously gerrymandering, cutting up Mindanao provinces to create polities where settler families took political power from Muslim communities.

This extremely exploitative modernism could only have produced resistance from the communities that President Marcos assumed would stand aside, to allow progress for the country’s dominant groups. The women who helped make this exhibition were among those who did not stand aside, and took the brutality of Martial Law. The Transitional Justice lens is necessary to discern the location of state transgression, although the lens also has to be recalibrated to focus on the subtle variations represented by each group.

This exhibition is one culminating point of the project, “Weaving Women’s Transitional Justice Narratives”, undertaken by the Department of Political Science of the Ateneo de Manila University, with support from the La Agencia Española de Cooperación Internacional para el Desarrollo (AECID) of Spain.

Development of a Text Classification Model to Detect Disinformation About COVID-19 in Social Media: Understanding the Features and Narratives of Disinformation in the Philippines

Development Of A Multiclass Text Classification Model To Detect Public Trust in the Government: Exploring the Lexical Features of Trust in the Philippine Context

Commencement Exercise for the Ateneo School of Medicine and Public Health, Class of 2020