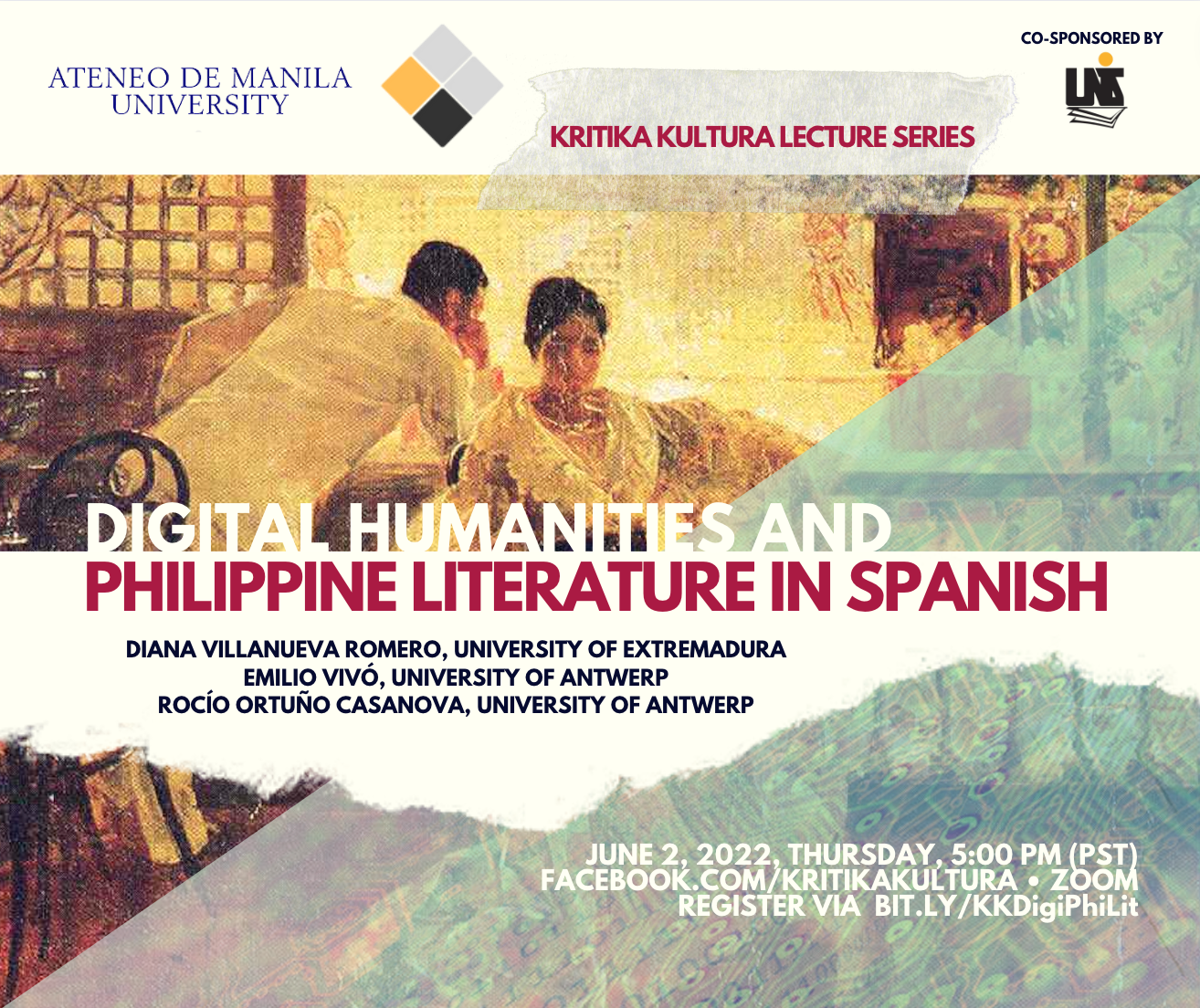 In celebration of its 20th anniversary, Kritika Kultura, the international refereed journal of language, literary, and cultural studies of the Department of English, Ateneo de Manila University, is hosting a series of online lectures this 2022.

The third of these lectures is on June 2, 2022, Thursday, 5:00 p.m. (PST), and features a panel discussion on “Digital Humanities and Philippine Literature in Spanish” with Rocío Ortuño Casanova, Diana Villanueva Romero, and Emilio Vivó. The lectures and Q&A will be conducted live on Zoom and simultaneously streamed on the Kritika Kultura Facebook page (facebook.com/kritikakultura). Interested members of the Ateneo community and the public are invited to register through this form.

This event is co-sponsored by UNITAS, the international online peer-reviewed open-access journal of advanced research in literature, culture, and society published by the University of Santo Tomas.

This panel presents contributions from three members of the Erasmus K2 project DigiPhiLit “Digital Humanities and Philippine Literature in Spanish” (2020-1-BE02-KA203-074821) led by its principal investigator, Dr. Rocío Ortuño Casanova of the University of Antwerp, Belgium. The partners involved in this project are the universities of Antwerp, Ateneo de Manila, Clermont-Auvergne, Paris-Nanterre, Rey Juan Carlos, and UNED. DigiPhiLit revolves around three axes: digital humanities, Philippine literature in Spanish, and distance learning. The project aims at organizing training activities as well as creating various teaching materials such as a MOOC that will be offered as a course in European universities, the publication of a manual on Philippine literature in Spanish that will support the knowledge provided in the MOOC, a guide to good practices in the teaching of literature in distance education, and a guide to the inclusion of digital resources in the teaching of literature in Spanish. The project has Erasmus+ funding until 2023.
Each of the three members of the panel will introduce a topic that connects Philippine literature in Spanish to other literary traditions: Diana Villanueva Romero will discuss  the life and literary production of Paz Zamora Mascuñana in relation to Paz Marquez Benitez and Sofia de Veyra; Emilo Vivó will study the manipulation of Rizal’s memory in Spanish Francoist books; and Rocío Ortuño Casanova will study the reception that Philippine writer Jesús Balmori’s trip to Mexico had in the Mexican press of the time. In this way, the panel aims to fulfill one of the objectives of project DigiPhiLit: breaking the isolation of Philippine literature in Spanish and highlighting its role in world literature.

About the Lecturers
Diana Villanueva Romero is an Associate Professor (Profesora Contratada Doctora) at the English Department of the University of Extremadura, Spain. Her field of expertise is Anglophone environmental literature. She is a member of GIECO, Research Group in Ecocriticism of the Franklin Institute, University of Alcalá, and holds a PhD in American Studies from the same institution. She is also part of CILEM, Research Group in Languages and Cultures in Modern Europe: Discourse and Identity and of the Institute for Linguistics and Applied Languages of the University of Extremadura. She has been a Fulbright scholar at Georgetown University (USA) and a Carson Fellow at the Rachel Carson Center (Germany). She is currently based at the University of Antwerp (Belgium) thanks to a Requalification Grant dedicated to exploring the intersections between Digital Humanities and Literary Criticism with a focus on Filipino Literature. Her latest publication is Imaginative Ecologies: Inspiring Change through the Humanities (Brill, 2022).

Rocío Ortuño Casanova is a Zelfstandig Academisch Personeel at the University of Antwerp (Belgium), where she is part of the research group of ACDC (Antwerp Center for Digital Humanities and Literary Criticism), and visiting postdoctoral researcher at the Universidad de Alcalá (Spain) where she is  part of the research group GILCO (Grupo de Investigación en Literatura Contemporánea). She specializes in the connections between poetry and music, Spanish poetry in the first half of the 20th century, and in the cultural and literary connections of the Philippines and the Spanish-speaking countries. On this topic she is the Principal Investigator of a number of projects such as DigiPhiLit, a European project which aims to make Philippine literature in Spanish accessible for people specializing in Hispanic Studies, Asian Studies, and Comparative Literatures, as well as  PhilPeriodicals, a project in collaboration with UP Diliman to create an online repository of Philippine rare newspapers and to train research staff in Digital Humanities. She has also created a portal on Philippine literature in Spanish within the Virtual Library Miguel de Cervantes, owned by Universidad de Alicante (Spain) and the database of Philippine literature in Spanish and Literature on the Philippines Filiteratura. She has had the pleasure to write a critical note to introduce the poetry book by Wystan de la Peña, Lineas copiadas del cuaderno de un poeta muerto joven, that will be published soon in Colección Oriente, and is in the last steps of the publication process of two edited books with Axel Gasquet: El desafio de la modernidad en la literatura hispanofilipina (1885-1935) in Brill, and Transnational Philippines in Michigan University Press.

Kritika Kultura is acknowledged by a host of Asian and Asian American Studies libraries and scholarly networks and indexed in the MLA International Bibliography, Arts and Humanities Citation Index (Clarivate), Scopus, EBSCO, the Directory of Open Access Journals, and the International Consortium of Critical Theory Programs (ICCTP). Read KK issues and learn about submission guidelines and events on ajol.ateneo.edu/kk or email the editors at kk@ateneo.edu.