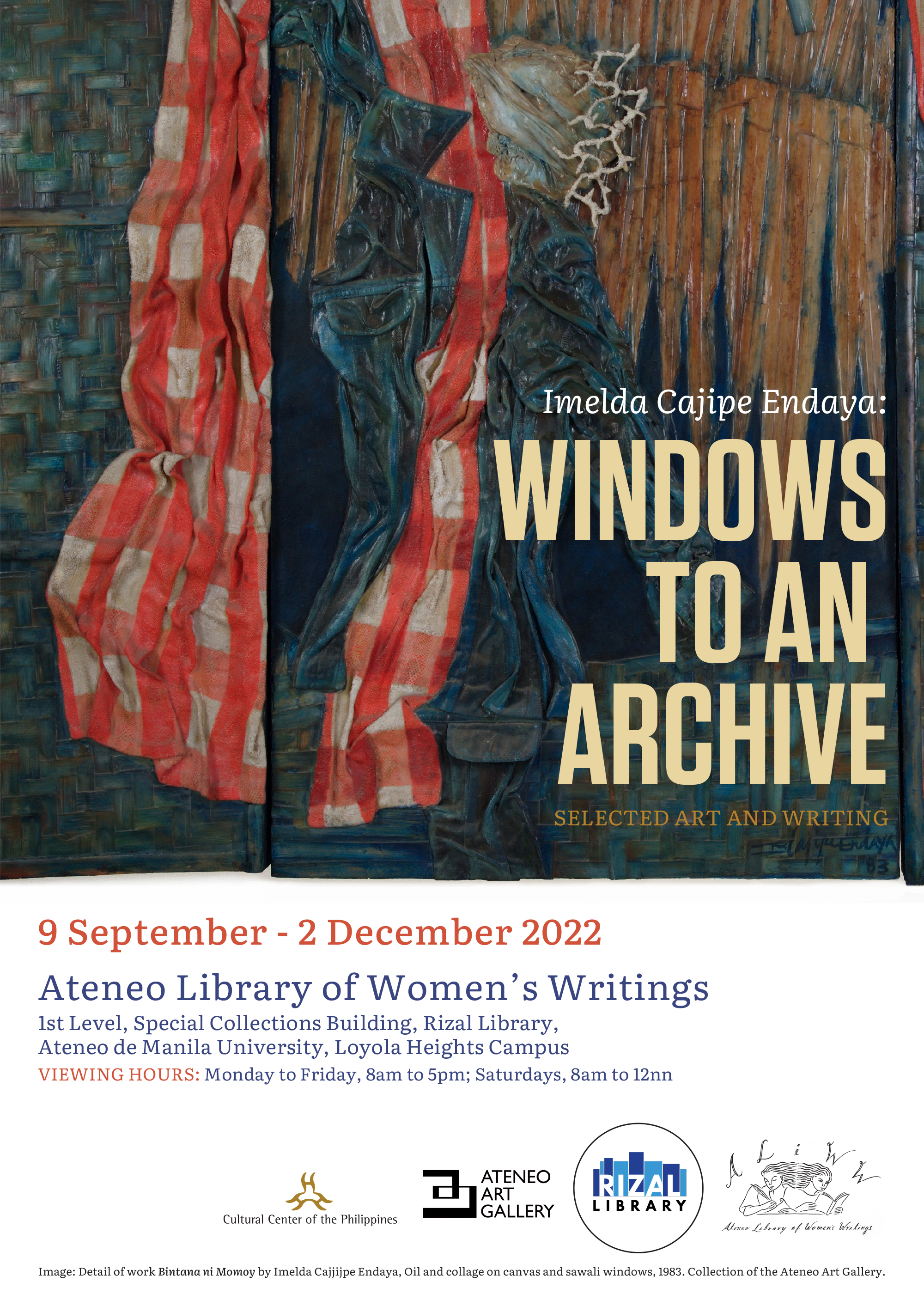 As the Cultural Center of the Philippines (CCP) celebrates the art of Imelda Cajipe Endaya, the Ateneo Library of Women’s Writing (ALiWW) and Ateneo Art Gallery (AAG) join their celebrations through Imelda Cajipe Endaya: Windows to an Archive, an exhibit that gazes into her life as an artist, cultural scholar, and feminist. The exhibit runs in ALiWW's Reading Room, 1st Level, Special Collections Building, Rizal Library from 9 September until 2 December 2022.


Featuring select writings and artworks archived in Ateneo de Manila University, this exhibit showcases Imelda Cajipe Endaya’s commitment to capturing her milieu by documenting her life and learnings through her writings and artworks since the 1960s. This exhibition is an off-site program of the artist’s retrospective, Imelda Cajipe Endaya: Pagtutol at Pag-asa, running from 3 September to 4 December 2022 at the CCP’s third floor galleries.

Inspired by her artwork Bintana ni Momoy (1983), this exhibit serves as a window to Imelda Cajipe Endaya’s archival collection in ALiWW, which features thousands of materials that include biographical articles and clippings, correspondences, exhibit materials, notes, essays, photographs, and publications that represent her growth not only as an artist but also as a Filipina. These materials paint a complex milieu of an art scene that was in the process of documenting, discovering and exploring the boundaries of cultural and gendered expression, a society that struggled against the oppressive structures of patriarchal and political regimes, and a womanhood determined to achieve their full humanity by overcoming various forms of social injustice. Collectively, these materials and her artworks show her devotion to understanding the truth about the realities she saw outside her window. In the words of Imelda Cajipe Endaya, “Art is a truthful and imaginative expression done in skillful and concrete form, as a response to matters of an individual’s life, his/her society and culture.” Cajipe Endaya’s meticulous research and studies on women, society, and culture informed many of her artworks in the CCP exhibit, as well as Bintana ni Momoy (1983), Babae (1982) and Ebolusyon (1976) which are part of AAG’s collection and are included in this exhibit.

The confluence of Imelda Cajipe Endaya’s art and writing within “a room of women’s own” highlights Cajipe Endaya’s feminism. As part of her conversation on culture and the role of the artist, Cajipe Endaya mentioned, “A room of women’s own indeed strengthens self-identity. But building a network with other women artists is even more empowering.” The exhibit shares a space with other women who generously contributed their works to ALiWW, creating a rich database of women’s knowledge. Imelda Cajipe Endaya’s collection is one of many in the archive whose materials seek to inspire and empower women who have long been marginalized in society. In opening the window to her works and writings at ALiWW, this exhibit invites its visitors to be part of this women’s network that celebrates and supports women’s liberation for generations to come.

Imelda Cajipe Endaya (b. Manila, 1949) is an artist whose work is distinguished by artistic research and conversation across forms and materials. Sustaining a practice that is “firmly situated within the coordinates of Philippine society and history”, she has also gained recognition in the Asia-Pacific for a singular Filipina visual language that is focused on the possibilities of feminist art.

For more information about the exhibit, please view our virtual brochure at bit.ly/ICEatALiWW. Guidelines on campus entry for guests can be found here.

Feast of Our Lady of the Most Holy Rosary

Feast of the Holy Guardian Angels

Health Challenges and Opportunities in the Philippines and Indonesia