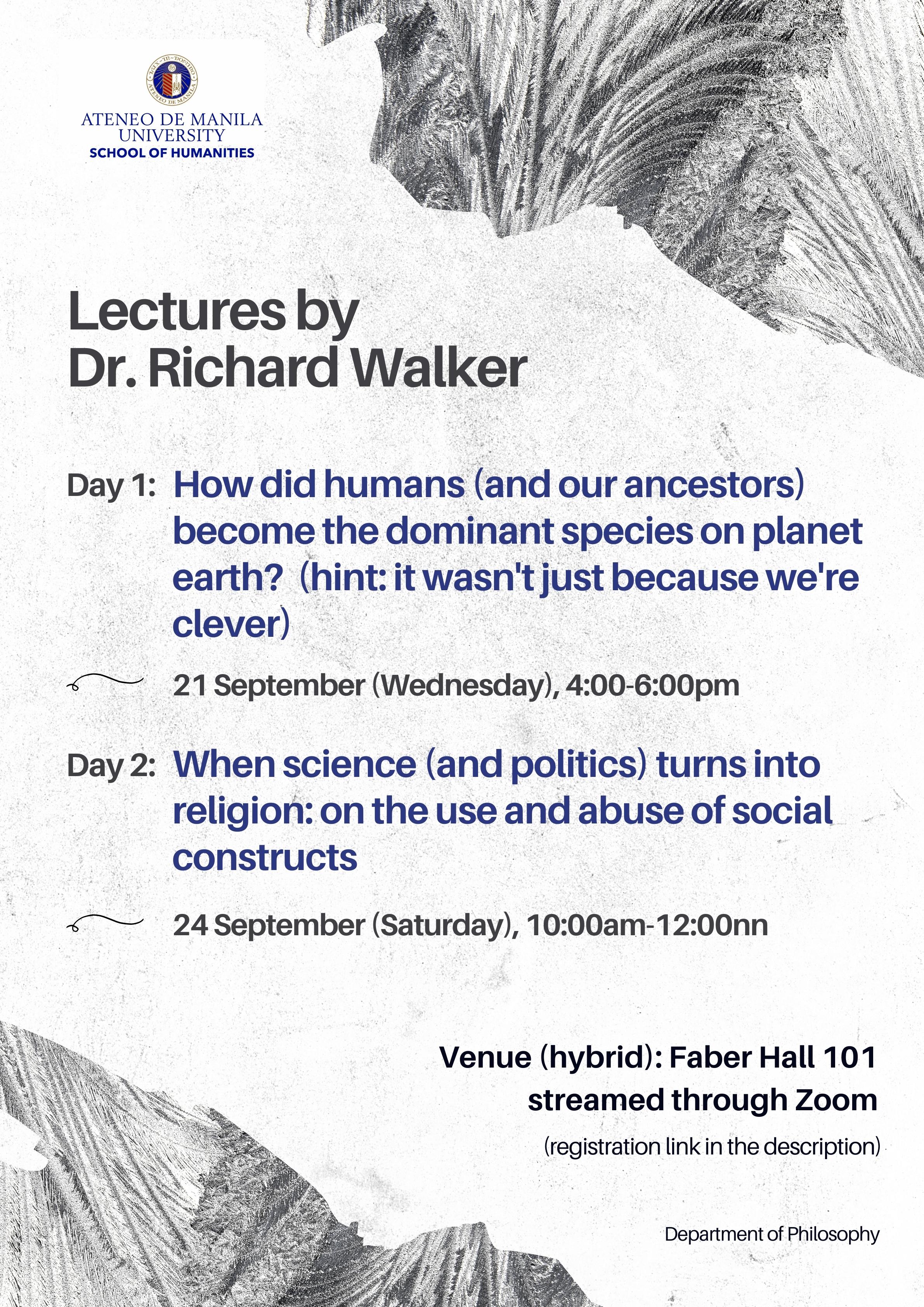 The Department of Philosophy

HOW DID HUMANS (AND OUR ANCESTORS) BECOME THE DOMINANT SPECIES ON PLANET EARTH? Hint: it wasn't just because we're clever

Very clearly, modern h. sapiens dominates planet earth. But why? The traditional story says it's because we have bigger and better brains than any other animal. But the truth is more complex and more interesting.  In this lecture, I shall provide a summary of human evolution over the last 3 million years that integrates archaeological, and biological observations with theory and mathematical modeling.  In this account, human evolution originates in the ability for social learning that we share with all the great apes. Social learning enabled our distant ancestors to develop distinctive cultures and tools. Competition between different Cultural Variants drove cultural evolution - setting in motion the Cumulative Cultural Evolution that distinguishes humans today. The human brain definitely played a part in this story - but it was probably more a consequence than a cause of human culture. Equally important are other factors, in particular the extraordinary growth in population sizes and densities as our ancestors spread from Africa, to Eurasia and then to the rest of the world.

WHEN SCIENCE (AND POLITICS) TURNS INTO RELIGION

On the Use and Abuse of Social Constructs

It is common in academic, scientific and political debates for both sides to claim that their version of reality represents objective truth and that the version put forward by the other side is a human invention or a social construct. It is an approach often found in debates between proponents of different religious viewpoints. Here I will argue, very simply, that such arguments are wrong. In the first part of my lecture I will use philosophical arguments from pragmatists like Richard Rorty with recent results from visual perception studies to argue that human perception and reasoning depends on maps that we ourselves create. Like maps of the globe, the price for representing some features correctly (e.g. distances between places) is that the map omits or distorts other features (e.g. the size of continents). In this perspective,  the map is neither true nor false. We judge it depends on its usefulness for a specific human purpose   In the second half of the lecture I will use this idea to analyze  the debate around definitions of gender and sex, the classification of human ancestors into different species, differing accounts of the historical origins of the United States, and different ways of defining and classifying 'mental disorders', showing that many of these debates are the result of an erroneous belief in the objective truth of particular maps. Once we have realized that all maps are human inventions and that none of them give us the objective truth, we start the real job: working out which map is most useful for our scientific and political purposes.

Richard Walker recently retired from a position as a staff scientist in the Blue Brain Project – a large scale neuroscience project, hosted by EPFL Switzerland, whose goal is to build biologically detailed simulations of the rodent brain. At the BBP, Richard led the writing of the research proposal, which led to the creation of the EU’s Human Brain Project. Since then Richard has focused on his own research interests – in particular the relationship between population size, culture and human evolution. Some early results can be found in a recent paper in PLOSONE.

While a lot of Richard’s career was spent in industry, he has also contributed to a broad range of scientific disciplines. After initial work in international economics, he shifted his attention to Artificial Intelligence and Artificial Life. From 1992 to 2002 he worked on problems connected to the evolution of complexity, concentrating on the relationship between learning and evolution and on so-called “niche selection”. Between 1999 and 2002 he worked in a research program aiming to reproduce classical experiments in experimental psychology using simulated robots. Finally in 2010 he moved to the Blue Brain Project, where he participated in the work leading to the project's publication of the first draft digital reconstruction of the neural microcircuitry of juvenile rat in Cell 163:2 (2015).

Sometimes at a loss to describe his job, he sees himself first and foremost as a translator between different languages, cultures and disciplines. In the time left over, he enjoys rigorous writing, rigorous science, rigorous thinking, classical music, cooking and the game of Go.

It is with hope that the Department of Philosophy hosts these lectures toward broader ways of thinking about reality, hence a deeper reflection on the meaning and purpose of our human existence.

Admission is free, but registration is required for both onsite and online attendance. To join the lectures, please register by Saturday (September 17, 2022), 5 pm (for Lecture 1), and Wednesday (September 21, 2022), 6 pm (for Lecture 2), through the following link: https://forms.gle/2xLcM7FibjFnEhid7.

Please await our email for confirmation of your attendance.

For further inquiries, you may contact Fr. Earl Valdez at eavaldez@ateneo.edu or Angelo Perez at angelo.perez@obf.ateneo.edu.

Thank you for your interest, and we look forward to seeing you onsite or online!

Launch of the Global Map of the Jesuit Social Centers