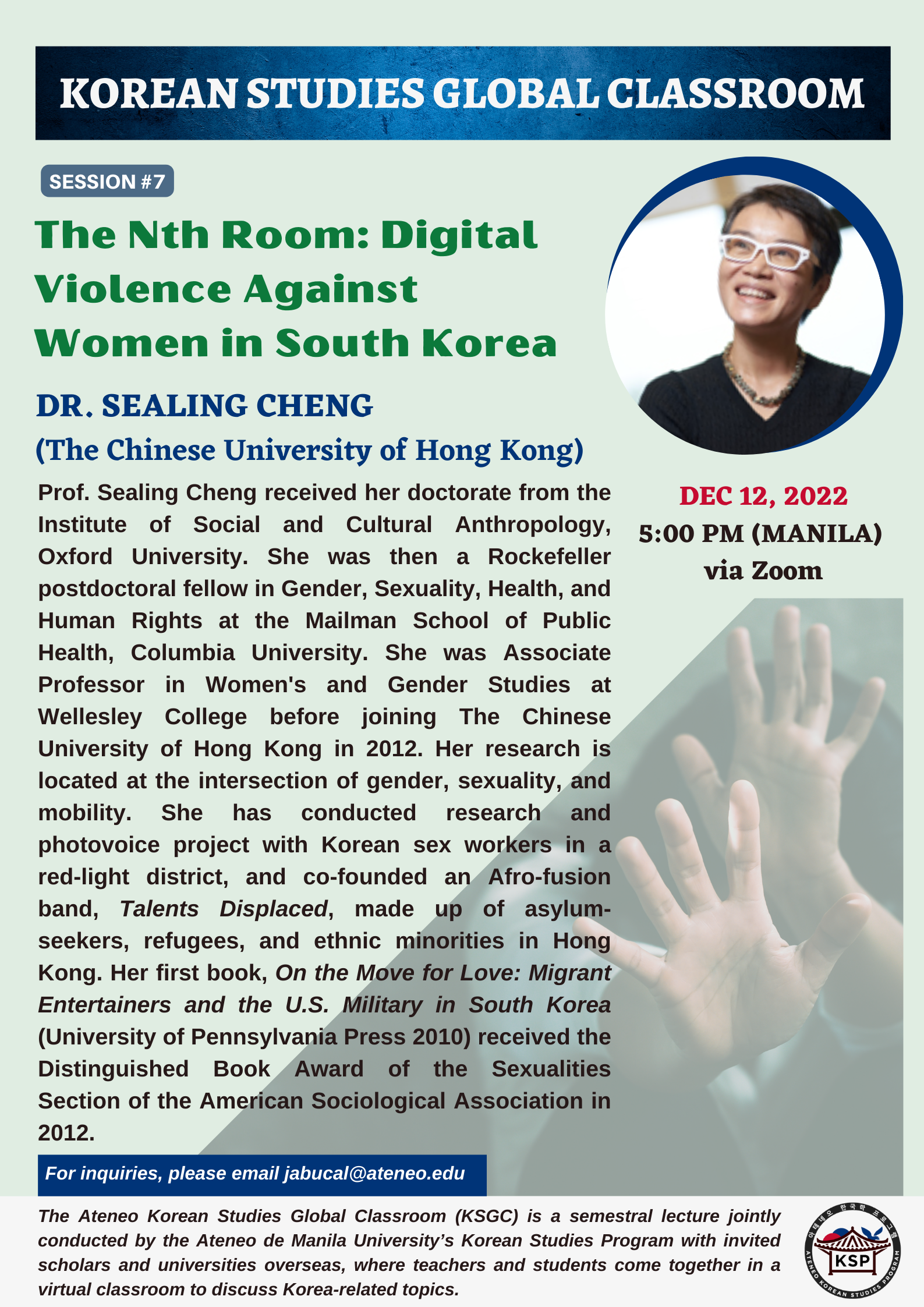 The Ateneo Korean Studies Program is pleased to open the 7th Korean Studies Global Classroom on December 12, 2022 (Mon) at 5:00 PM. Dr. Sealing Cheng, Associate Professor from the Department of Anthropology, The Chinese University of Hong Kong will deliver a lecture entitled “The Nth Room: Digital Violence Against Women in South Korea”.

In early 2020, South Korea was consumed with shock and outrage at the extreme sexual and physical exploitation of over 100 women, including 26 minors, in online chat rooms in “The Nth Room Incident”. Dr. Cheng will discuss how men’s sexual domination of women is entwined with pervasive narratives of emasculation in Korean nationalist narratives. In particular, she argues that masculinity has been co-constructed with sexual violence within a narrative of patriotic “manly redemption” in Korea. She will also offer an account of the feminist movement against sexual violence, including the #MeToo movement in South Korea, to examine the possibility of co-existence between different genders and backgrounds.

Dr. Sealing Cheng received her doctorate from the Institute of Social and Cultural Anthropology, Oxford University. She was then a Rockefeller postdoctoral fellow in Gender, Sexuality, Health, and Human Rights at the Mailman School of Public Health, Columbia University. She was Associate Professor in Women's and Gender Studies at Wellesley College before joining The Chinese University of Hong Kong in 2012. Her research is located at the intersection of gender, sexuality, and mobility. She has conducted research and photovoice project with Korean sex workers in a red-light district, and co-founded an Afro-fusion band, Talents Displaced, made up of asylum-seekers, refugees, and ethnic minorities in Hong Kong. Her first book, On the Move for Love: Migrant Entertainers and the U.S. Military in South Korea (University of Pennsylvania Press 2010) received the Distinguished Book Award of the Sexualities Section of the American Sociological Association in 2012.

Students and faculty of the Ateneo de Manila University who wish to participate may register at  http://go.ateneo.edu/7THKSGC.

For inquiries, please email us at ksp.soss@ateneo.edu

“Open Climate Science,” A Webinar by the MCR-ADMU Regional Hub